In my recent class I was pretty excited to see so many people wanting to draw!  The class was electric and the students really pushed themselves.  We had two models "Daniella Traub" and "John Tucker" and they had us speeding through ink and paper.

When drawing two models at a time you really want to build the first trajectory lines around both models simultaneously.  If they're drawn seperately time may run out on the pose and then we're left with half the drawing done.

I likened it to a sculpture who may see the two character pose in a large chunk of marble.  The sculpture sees into the stone and carves out the two characters simultaneously.  I wouldn't think that they'd completely carve one model leaving the rest of the marble in tact.

There's a relationship happening when there are more than one model or person on the street that you're sketching.  An electricity that goes between the two (Or more) subjects that we need to notice and capture in our work.That's the spark of life and interaction that we are trying to catch.  Some of my favorite art has this storytelling in it and draws us in. It can be anything to illicit an emotion- a coy look, a smile back and forth or one chasing another.

Here's to a new year of lots sketching! 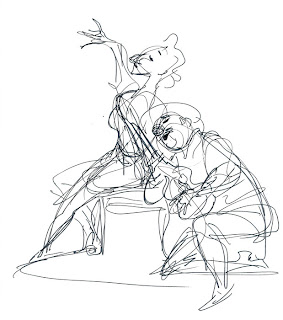 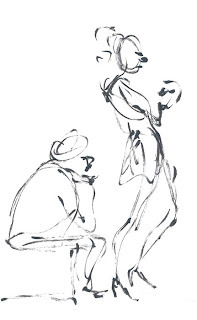 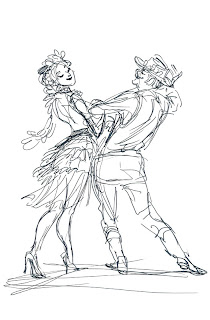 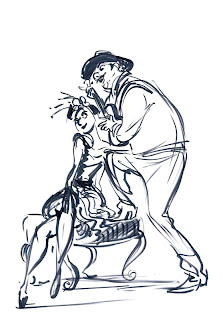 Posted by Dave Pimentel at 2:26 PM

I love all of these sketches. Everything is so clean and evocative. I'd really like to be able to sketch like that someday.

I just went to my first live model sketch meet last night (with John Tucker as a pirate), and it was really educational--but this sounds even better. Two models interacting and telling a story together... what a great challenge. :)

So helpful! Thanks for that info, Dave! Happy New Year

Thanks for great tips! I haven't gone back to life drawing class yet, this year. Going to make it happen, noooowwww!

I love your confidence you're portraying with the marker pen..awesome!