It's not often you are able to see Walt Stanchfield sketches or artwork. Granted, anyone who has his golden notes has some of his doodles of correction. When I was back at Disney's drawing with him he was constantly bringing in his latest sketchbooks and the students, including myself would pour all over them and soak up as much as we possibly could through any process of osmosis possible. He was very modest and didn't really want us to give him praise, he constantly threw his hands at us with a big push of air through his teeth and say "Naaaaaa!" Either way his artistry and patience as a teacher was like a light that guided anyone who took his class. He wasn't pushy with style, he always looked at personal style as a blessing and something that was unique to the artist. This made his job more fun, he got to see so many different types of work that inspired him and gave him more fuel to produce his own great pieces. When Walt passed his wife Dee knew of a few artist's at the studio who Walt was close to. She took it upon herself to give some of his sketches to them. The pieces were divided up among us and we all were given a little piece of Walt's heart and passion, truly one of the best gifts I'd been given. Then there where some that where Dee's personal favorites that meant alot to her that she couldn't part with {understandably}. These she color copied and gave them to us and we were so grateful to her. Dee Stanchfield was completely graceful to have given away art that Walt produced.

These are a few of many that I will post in time. Enjoy! 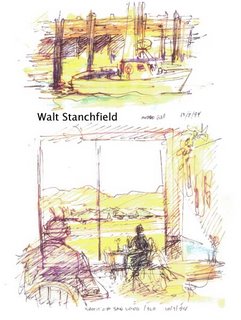 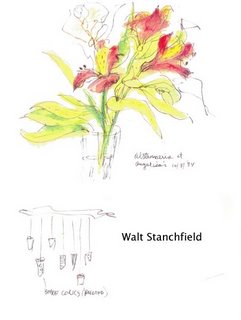 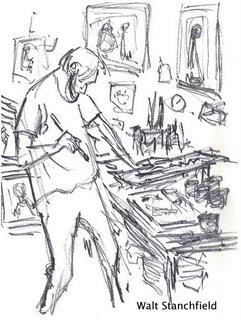 Posted by Dave Pimentel at 9:30 AM

This is so special. Took Walt's class in 97 while at this training program called, Disney Boot Camp.
He told us that some times he would paint his sketches with coffee. I thought my God this guy is a sketch maniac. And he was! And on top of that he could still whoop your ass in tennis. Aside from drawing, he spoke about his organic garden and eating healthy. Thanks so much for these Posts Dave these are awesome.
RD

I love that painter sketch, do you know who it's of? thanks for posting them.
-morgan

Love those energetic lines! THanks for posting!

Thank You. I enjoy and seek inspiration from the sketches posted by you.

Thanks so much Dave. Walt is the best teacher I never knew.
More please.
Thanks
J

Wow thanks for sharing your story and the art. Walt is an inspiration.

Really inspiring work. There are so many great stories. Thanks for sharing.

Interesting to see actual sketches by the maestro himself, thanks for sharing. SOMEBODY's gotta do a book on Stanchfield?

Anonymous said...
This comment has been removed by a blog administrator.
8:00 PM