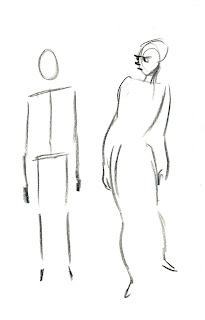 People use the stick man to guide them along in their sketches way too much.  I go to class and many people draw that stick figure guy before any shape of the model is attempted.  I've seen portfolios with that stick man peeking through. I’ve even seen commercials with the stick man acting and posing for the audience.
I don’t like him!  When he’s used in a gesture sketch he gets in the way of rhythm and clarity.  I understand why people draw him - Line of action, forms, volume.  That’s been the whole excuse for his existence.  I guess he was used in beginning art classes to simplify gesture to the most rudimentary state so we could grasp the idea of anatomy and form - but the problem is he’s never left our brains and a lot of artists still depend on him as a friend, but he’s not!!!
Maybe I’m being a little insensitive to Mr. stickman but maybe a contour approach is worth considering.
In the beginning of a sketch we want to start building the pose out.  I like to start with the abstract shape as I build the sketch.  Those lines that I put down and commit to are usually contour lines that I will use – and if not use - closely guide me to the final product.
When students watch me sketch some interrupt and say “oh you’re outlining.”  But that’s not true, I’m building lines around the shapes in my head.  I’m trying to have foresight in my approach.  Thus not having extraneous lines that get in the way of lines and shapes that matter.  I believe that we all can project the line of action in our heads as we develop the sketch and look for the gesture.
Here’s an example of what I mean.  After doing this sketch below I retraced the strokes that it took to complete them.  Mr. Stickman took approx, 24 strokes and Ms. Foresight-Contour girl took approx, 28 strokes.  It took roughly about the same effort to draw Ms. Foresight as it did drawing Mr. Stickman. 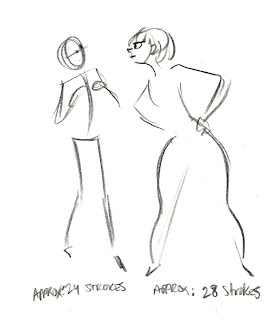 As I finished the sketch on the right I was able to use lines that I started with and counting strokes aside, the lines became more valuable.  Mr. Stickman’s lines are always going to be conflicting with his final lines.  I also get more for my money by thinking about other principles as I draw, such as acting, straights against curves, squash and stretch, body twists, stability and weight. 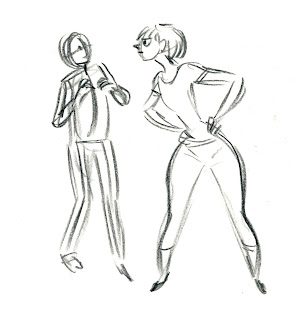 In this example the drawing on the left shows where I started using lines that matter.  The right one shows the same lines put to good use without any inner lines getting in the way.  You can say that I’ve developed a new kind of stick figure using curved and straight rhythm lines that contour the shape of the model to reach my final sketch. 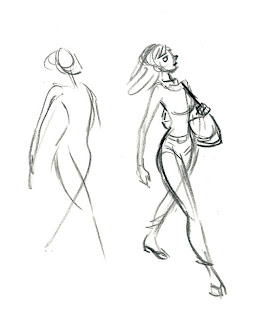 It’s not always easy to grasp and it takes a lot of drawing and sketching time to feel comfortable excluding internal line work.  Some artists are naturals but if you’re like me it takes a lot of good practice.

On these last pieces I started with this whole approach and you can see faint lines within the final drawing where I was building shapes. There are no stickman lines at all with in the interior and that makes me very happy.

I’ve talked enough. I’ll leave you with advice that Walt Stanchfield gave me when I asked “how can I improve?”  He simply said…
“Draw Draw Draw!!!” 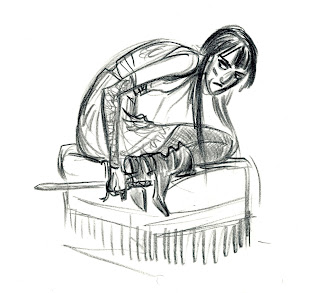 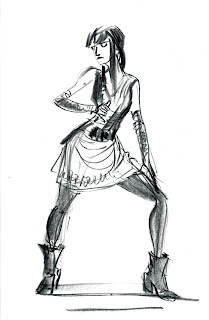 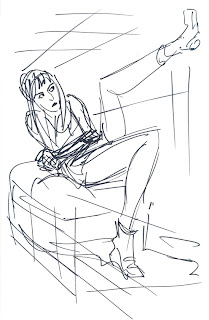 Agreed, wholeheartedly, and this post is going to come in incredibly handy the next time I try to vocalise my approach to those fellow artists who prefer the stick figure method. (I'm sorry to blow my own horn like this, but) every now and then they ask me how I achieve rhythm and movement in life drawing. They seem to think it's the anatomy that comes first and personality later. Even if they watch me do the opposite, showing is not equal to drawing it yourself -- and drawing it over and over and over again. Thanks for a useful and inspiring post.

For the same number of strokes there is so much more information in a contour drawing than a stick man.

Thanks for the tip - and the inspiration.

wow those first contour lines tell so much of the character!

Wow, this is very useful, thanks for sharing! I was really struggling with old Mister Stickman. I noticed that people like Chris Chua and James Robertson don't clutter up their drawings with construction lines and I had no idea how they did this.

This helps me a lot, thanks!

Thanks everyone-
Remember, it's not outlining- it's drawing around the shapes!

Great work Dave, inspirational. I was just getting back into gesture sketching and was using Mr Stickman as the base. Your method scares the shit out of me, but I'm going to try it ;)

Thanks, I am looking forward to getting your email.

Magnificent! Thanks, Dave - this is something I'm still struggling with, and I appreciate the insight you share.

Bravo Dave! Awesome post. (I don't give out too many bravos.)

Great thoughts! I'll add a kudo to Clay's bravo(and I don't give those out too often either).

This just popped up and already all these comments. Now I'm greedy for more, more--more posts!

Great post Dave. I was going through a system of drawing staring with the stick figure and i was starting to get it down, but was looking forward to someday bypassing that step. I feel confident i can skip now that i've read your post. More posts like this would be great ;) Keep up the great work!

Thanks a ton for posting this! I will practice this technique and make stickman go away!

If it makes you feel any better, I'm an art teacher and I've never heard of (or seen) Mr. Stickman before. I teach my students to draw using contour lines.

You're ahead of the curve! Keep up the good shape oriented teaching!

This is great advice. Thanks and keep up the good work !

super awesome and useful post, and yes i do agree with the idea of making lines matter; contours can be very misleading from what I've read here "also observed in my own work" to think of them as edges of from is the most helpful. thank you for sharing this.

I give this principle in my animation classes...
i never belived in the stick man!!!
i tryed hard to use it but it never worked to me...
I think silhouette, line of action...go through the side, not the middle of the structure...it goes through where there[s tension!
i must say the drawings are just perfect to explain it! thanks!

Like others, I've also been guilty of using the stickman from time to time. Great post! Can't wait to try a different approach.

maybe I'm still just to much of a noob, but if I try and go with just designy lines (straight vs curves) my proportions get all jacked up.

Only way I can get in the ball park is laying down a gesture line and loosely sketching in head/ribs/ pelvis masses, then I can flow the contour and limb lines afterwards.

But starting with contour lines I wind up with odd unappealing shapes for my main masses.

Is this just lack of training? Lack of practice? Or am I failing to grasp something?

I agree with Alonso. Proportions are based on bone because bone does not change with pose. Although I understand and appreciate the idea in this post, I find this post to be a little arrogant to beginning artists in a "Let them eat cake" sort of way. "Why don't you just write the final draft of the novel the first time? Saves typing!"

Construction lines are used to construct the figure. The figure is constructed of bones. Outline curves change length based at least on overlap and inner corner vs. outer corner.

I believe that you have learned to draw figures in proportion well enough that you are able to draw silhouettes that look very good from the first line you put on the paper. This relies on your internal visualization of the form, if not a 'stick' put on the paper. It takes time to learn that skill.

Just because you've internalized the process doesn't mean it isn't an important and necessary step. Thank you for the interesting post.

Remember the beginner: "How to draw an owl"
http://www.conceptart.org/forums/showthread.php?t=195080

Johnnyburn: I hate to say this, but personally I feel that there is only one excuse for bad drawing. Your not that passionate about it. This post is for people obsessed with drawing. People who are obsessed want to learn and put in the thousands of hours it takes to study and learn. Dave is far from arrogant. And for people who are not passionate about drawing who don't draw at least five or more hours a day, I say, "Let them eat cake."

I greatly appreciate everyone's comments, even Johnnyburn's. I love that owl approach! It's one of the funniest things I've ever come across.
Alonso,
I really think that you will eventually graduate from the under drawings as you begin to trust yourself and your ability. All that under drawing is in your artist's mind and after you've done a ton of drawing you'll begin to gain so much confidence that you'll want more challenge and I believe you'll do great!

(yeah, sorry for my harsh tone, above)
I think that I will need my stickman training wheels for a little while longer. This is good encouragement to stop using it when it isn't helping me any longer.

I just noticed my coworker who went to a different school then me draws your way, with a contour line following the rhythmic edge of the model, and his proportions are always solid. So I guess it'll just be a matter of practice and grinding through the bad drawings until I can let go of my old way to pick up a new one.
thanks

Thank you for this lesson Mr. Pimentel. I can't wait to try it out!

I thank you deeply, Mr. Dave. Recently I've been rebuilding the way I think and construct my drawings from the very basics, but I still hasn't found a reliable and interesting alternative for Mr. Stick Man, and ended up using the "Mr. Ballon Boy" approach. Your method is useful, smart, and incredibly expressive, and it rings true to me. Gonna change my way of drawing yet again, and I'll do it gladly!

PS: Sorry for the terrible english.

What did Mr. Stanchfield say? Practice?

this is good stuff! thanks for sharing this.

Thank you for this post! It is definitely helpful for aspiring artists like me who happened to be guilty of using the stickman in my early days of life drawing.
Though I am more familiar with Glenn Vilppu's approach to gesture drawing, I find they both have some similarities with each other and that this is just as valuable in gathering tools to capture motion and emotion.
I am for sure going to practice more of this. :)